The Science Behind How Our Saliva “Code” Affects Our Waistlines

Genetics does affect fat storage but is generally not the cause of obesity.

Have you ever looked at your thin friend with a plate of carbs and wanted to throat punch them a little? Maybe you’re “that” friend.

I’ve been on the receiving end of looks and comments from people wondering how I can “eat all those carbs.” Would you be surprised if I told you that your saliva helps determine how much fat you store from the carbohydrates you eat?

A great example is my husband and daughter, they are built very similarly and nothing like me even although our diets have always been basically the same. They have always been thicker around the middle and need to watch their carb intake a lot closer.

While my son isn’t built just like them, he is definitely not blessed with the ability to utilize carbs like some other boys.

I’ve always been naturally leaner in my midsection (not my hips!) and can be loose with my starch intake.

My daughter is the product of both parents but her DNA code favors my husband’s side. My son is somewhere in between. The same can be said for siblings around the world as they pull from different variations of their lineage.

Why can some waistlines tolerate carbs better than others?

Carbohydrates turn to sugar (glucose) in our blood. How efficiently our bodies convert and utilize carbs/sugar varies from person to person. Genetics, stress and quality/quantity of sleep are just a few factors that affect how well our bodies tolerate carbs.

I recently read an awesome article from Precision Nutrition and I thought I would trim it down to help shed some light on this very frustrating reality. Get the entire “sciency” article here.

Read the excerpt below to learn why some people are “luckier” than others.

… “What is “carb tolerance” anyway?

Actually, come to think of it, does “carb tolerance” even exist?

Sure, the phrase peppers a lot of contemporary dinner conversations.

But does anybody really know what it means?

Or maybe the problem isn’t carbs at all. Maybe their “baked potato” has more sour cream and butter than potato.

Then again…maybe some of those people simply can’t process carbs the way the rest of us do.

In other words, maybe their genes are to blame.

Salivary amylase (α-amylase) is an enzyme in your saliva that starts the digestion of starch.

We’ve known about amylase for a long time. (In fact, the first scientific article about it was published over 100 years ago!)

The gene that makes amylase, AMY1, varies in copy number from person to person.  And AMY1 genes have a huge CNV range, from two to sixteen copies.

As soon as you bite into that potato or plantain, your AMY1 goes to work.

And again, if you have more AMY1 genes, your carb-digestion work crew will be bigger and faster.

In 2007, researchers learned that people living in cultures that traditionally ate high starch diets had more AMY1 copy numbers and more amylase enzyme in their saliva.

(By the way, chimpanzees have two copies of AMY1.)

People who have more copies of AMY1 (the gene that makes amylase) have more salivary amylase and lower BMI.

If you have more than nine copies of AMY1 then you are eight times less likely to be obese compared to someone who has fewer than four copies of AMY1.

But, before you start blaming all your tendency to gain weight on your genetic inheritance, it’s important to note the total BMI range was only 2 kg/m2, from 25 to 27.

So while “carb intolerance” may influence your tendency to gain weight, it’s not the only factor involved.

This is the first study to link carbohydrate metabolism to obesity through salivary amylase and its gene (AMY1).

The findings suggest that there really is such a thing as “carb tolerance.”

People with more AMY1 are lucky.

Perhaps this also helps explain why eating slowly generally promotes weight loss (or maintenance). The more slowly we eat, the more we digest in the mouth. This, in turn, might lead to feeling “satisfied” with less food.

Higher levels of salivary amylase correlate to a higher pre-absorptive insulin response, and this is key to glucose tolerance. The reasons aren’t completely clear, but it may be because amylase breaks down carbohydrates into glucose and short chain sugars (oligosaccharides) that bind to sweet receptors or oligosaccharide receptors, signaling the release of insulin.

Everything’s lower GI to them.

Different amylase concentrations essentially result in different rates of carbohydrate absorption of the same food, or a different glycemic index for each person eating a given food. In other words, dozens of years of glycemic index may have just been foiled by this new finding.

Yikes! As if this weren’t complicated enough!

What you can do?

While all this sounds complicated, there are some simple solutions.

If, based on your genetic inheritance, you think that you may have fewer copies of AMY1 and may, as a result, have low carb tolerance, there are a few things you can do to ensure that you stay healthy and lean.

Eat slowly and chew your food thoroughly. It may sound simple. (And this strategy is far too often overlooked). But by eating slowly, you give whatever amylase you do have more time to break down the carbohydrates you just eat.  This puts you in the same position as someone with more amylase who eats faster. Ha ha! Now the game changes, Mr. Bond!

Use probiotics. Studies on mice suggest that lower amylase (and associated obesity) might be related to negative changes in gut microbiota. Probiotics can’t hurt, and might help, so even if you’re not a mouse, they’re worth a try.

After all, even people on the low end of the amylase production spectrum still make more amylase than chimps and nearly all other mammals.

Chimps may not eat bread, but they do eat carbohydrate-rich fruits — bananas being the most obvious. And it’s not too often that you see an overweight chimp.”

I hope this answers A LOT of questions as to why two people can have similar diets but two totally different physiques. It’s not fair but it is definitely genetics!

Want more FREE fitness and nutrition tips and tricks? If you haven’t already subscribed to my weekly newsletter what are you waiting for? Click here to subscribe at the bottom of the page.

If you would like to discover my program that has helped women break their yo-yo dieting cycle, you can learn more here 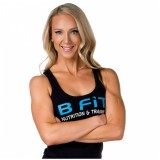 I am a Certified Nutrition Coach and Personal Trainer who is passionate about improving the health of my clients. My online coaching program allows me to serve nationwide. For the clients who have tried everything, my habit-based coaching program provides crucial education and dives into the challenges and obstacles that are holding them back. I empower them to shift their thoughts and actions, ultimately leading to the changes they have always desired.


Get my FREE ebook!

Copyright 2017 BFiT Nutrition and Training. All rights reserved to www.bfitbalance.com